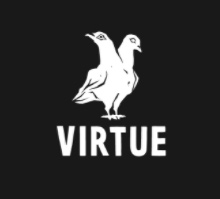 In February, we released a report exploring the clichés and tropes that advertising falls foul of year in year out. To mark the beginning of the holy month Virtue commissioned Ichraq Bouzidi, a multidisciplinary artist who likes to explore and work in a variety of media ranging from illustration to conceptual art, sculpture, installation and painting. You can follow her on Instagram here.

We've been fans of Ichraq for a while so it goes without saying that we're super happy to share with you three artworks inspired by the themes in our report.

Look Beyond The Barcode

"As a North African and Arab kid, a big part of Ramadan was for me all about gathering with the family around TV shows and entertainment. With my eldest brother we used to remember by heart every ad and show with its music, storyline and even actors, then will sing it afterwards while running around the house. Thinking about it now, as much as I cherish this memory I find it kind of sad that it was linked with consumption and advertising products. The illustration sums up the feeling I had when I thought of this souvenir, it's an invitation to look beyond the redundant consumption codes and ads cliches and create memories that we could cherish endlessly without any regrets."

"During the month of Ramadan and in general, television and its commercials often show a picture of a happy 'perfect family', the dad and children gathered around a table waiting for the mum to cook and prepare the meals. In the era when it is time to promote equality and empower women in society, I kept wondering how the creators of advertisements still envisage showing these kinds of images full of stereotypes and clichés? It's time to erase those clichés, and that's what the illustration is trying to depict. The figure of a woman, in memory of my mother, symbolizing the strong and courageous woman, painting a blue sky, in a giant television filled with darkness, showing figures of a woman with a plate head and a man with a hammer head, both as a metaphor to the stereotypes that the TV conveys. The Blue Sky is symbolic of hope, equality and change that it sets to erase old cliches and replace the darkness of old gender imbalances in TV."

"The lantern is called Fanoos Ramadan which is a folk and traditional lantern used to decorate streets and homes in the month of Ramadan. It traces back to the holy month since history, it has been, still and will be linked in our minds with this month's celebrations and traditions eternally. In the illustration the woman is standing in a dark enclosed room, facing a show of food waste while holding a Ramadan lantern. The enclosed dark space is used here to depict a wrong behavior which is amplified by the frame at its center showcasing the food being wasted, as a metaphor to TV ads showcasing tables filled with endless food and inciting people indirectly to waste it.  The Fanoos provides light and enlightenment to help the woman holding it lead the way forward, towards the future, pushing aside the surrounding darkness as an allegory to change."